Adolescents and the Pandemic: A Psychodynamic Perspective 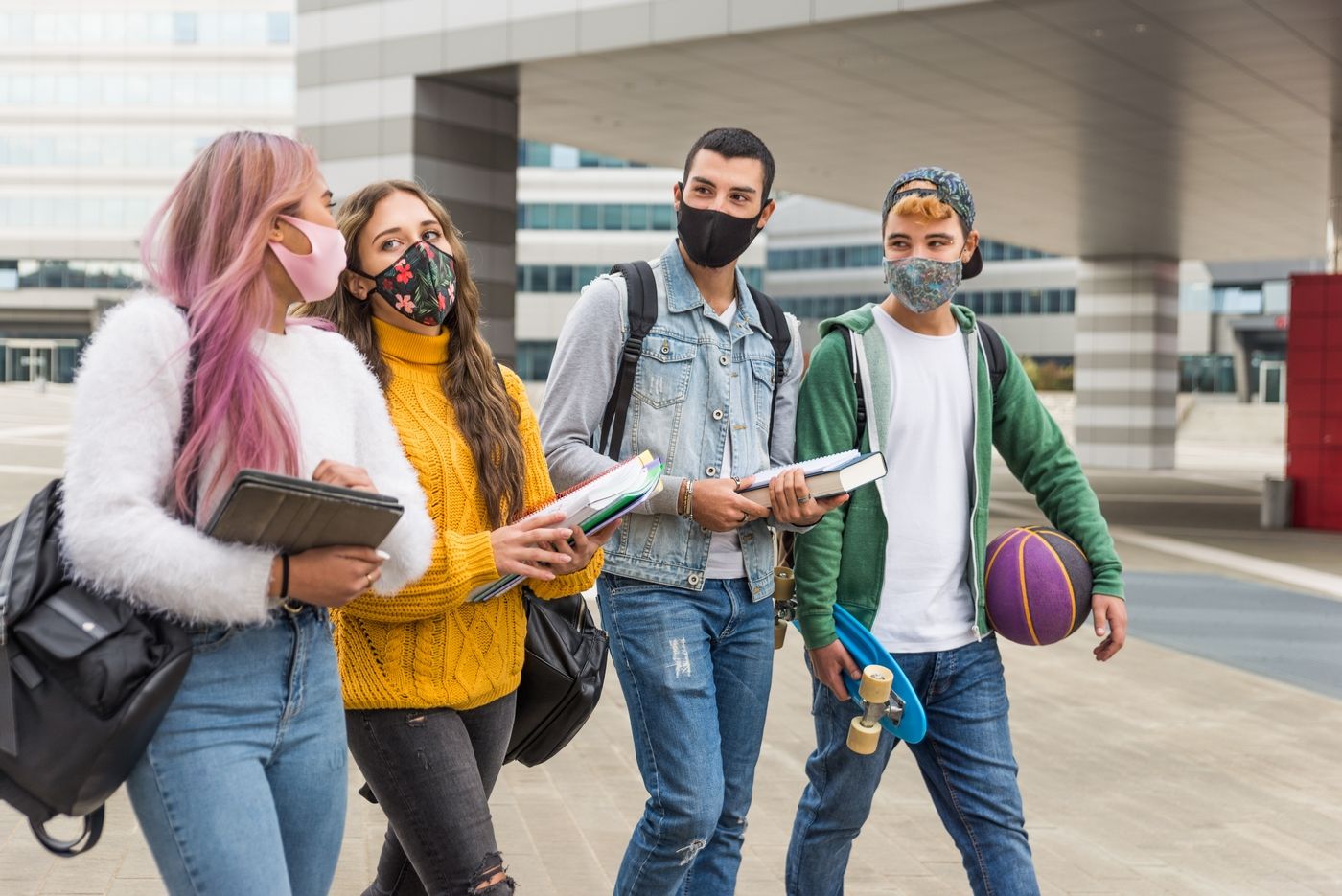 More than a year after the outbreak of the pandemic since Covid-19, girls and boys between the ages of 11 and 25 bear the marks of an experience that has left them confused, afraid and even very angry. What it means to be teens during a pandemic world? And what challenges did the unconscious of the younger ones have to face?

The domestic segregation experience we went through during the lockdown it was so amazing and shocking that it will take time to fully integrate it into our life and memory. Even now, a year later, there remains the feeling of a disconnected, almost unreal experience, an interlude of immobility in which intense and contrasting sensations and emotions have condensed.

The space during the lockdown

We know how well the experience of the lockdown compressed it vital space, made permeable the boundaries between public and private life, cleared distances that, especially in adolescence, are a fundamental element on which to modulate growth and the movement towards one's own individuation.

What effect has this sudden narrowing of the available space produced?

We are led to imagine theadolescence as a phase of life of great expansion, under the impulse of hormonal storms that produce a strong push for exploration and a frantic search for new experiences. In part this happens. But in the teens there is also another part.

The one terrified by the changes that are produced in the body and by the intense sensations that accompany them, ashamed of showing herself to the world in her own imperfection and incompleteness, distressed by the prospect of detaching herself from her parents and their all in all comfortable mirroring. Rather conflicting forces are those that therefore inhabit the unconscious mind of theteenager: the expansive one and leaning towards the discovery of oneself and the external world, and the regressive one more oriented to the withdrawal and maintenance of the status quo, which turns a nostalgic look backwards, to the world of childhood. We can therefore imagine the destabilizing effect of an environmental emergency that forces one to remain confined inside the house, fearing for one's health, but above all for that of loved ones, eliminating the opportunities for socialization and extra-family aggregation, if not in a distance.

We imagine that boys and girls have been forced to live together, as well as with their families, also with the ambivalence of feeling frustrated, forced to accumulate sacrifices and lost opportunities, but in part perhaps also reassured, entitled to take shelter from gaze of others, easing the pressure to fulfillment and social recognition.

The time during the lockdown

Also the perception of time in the minds of teens has undergone strong alterations during the months of lockdown. A feeling of immobility, of waiting, very distressing for those in a phase of life in which they feel a sense of urgency within themselves, a strong need to perceive themselves in motion, to feel master of their own time.

There is a need to feed the imagination with plans for the future, to feel the time as a resource at one's disposal, the feeling of “having the whole life ahead” with the corollary of numerous possibilities, of infinite possible choices. Slowly we will also face the restriction of choices, with the definition of oneself and one's path, but it will be something gradual, progressive.

La pandemic instead it suddenly compressed the time available, shrinking and freezing it. On the one hand, the time firm then, with the distressing sensation of stalling, on the other a time that runs away, flows without leaving significant traces, leaving behind a terrible feeling of loss, of failure, of missed opportunities. In any case a time that one undergoes and does not live, an experience that undermines the acting sense of oneself. The forced coexistence has forced to put on stand-by their own growth requests. In a key to reading psychodynamics and evolutionary, perhaps the experience of confinement of the lockdown presented, staged in reality, conflicts and anxieties that already inhabited the minds of the youngest, leaving them astonished, frightened: the ambivalence regarding growth, the anguish of death, the anxiety of separation from the parental figures, the painful perception of one's own and their vulnerability, fear of blocking and immobility.

The forms of adolescent malaise

Many young people in that stalemate they seem to be stuck there. There are many boys and girls who have asked for help or have shown signs of malaise in the last year. The "return to normality" was often a further element of disappointment: school continued with distance learning, dance lessons on zoom, group outings on party-house. School was an environment in which stress, fear of not being able to make up for lost time, disorientation and overload were concentrated.

In the worst cases, these experiences were accompanied by a sense of detachment and indifference on the part of professors who for some reason probably defensive in nature, ignored the implications and moods of the students and barricaded themselves behind a wall of rigor. and imperturbability, giving importance only to the results and recovery of the program. In some cases the boys and girls have had to deal with skipped family balances, intolerances amplified by proximity, avoided and denied conflicts, which have come to a head in forced coexistence.

Hope for the future has given way to a growing disillusionment and distrust of the adult world, of their own possibilities and ability to make it.

Digital platforms and social media have made it possible not to live in a condition of complete and total isolation and, indeed, those without one have experienced a very strong sense of exclusion and lack of opportunities. However, even the moving of life into the virtual dimension has contributed to fueling a sense of alienation, of disconnection and which, in some cases, may also have been used, as a self-managed tool to anesthetize, be numb, disconnect from those threatening and disturbing sensations.

Il renouncing withdrawal of many teens it is often connected to the massive use of video games, online entertainment sites, social networks and forums (as the only social environments), and we can read it as the signal of a profound identity crisis, an evolutionary paralysis in which to cancel the prospect of the future and of change. Other times the malaise was expressed with attacks on the body, which has become an object over which to exercise power and control.

Eating disorders, acts of self-harm, suicidal acts are the ways in which the sense of discomfort and self-esteem is expressed most frequently, the sense of inadequacy, anger neutralized and turned towards oneself, shame for the one's own needs of dependence so in contrast with the autonomous and independent ideal image in which one would like to be reflected. These are the forms that the discomfort of teens, existed before, they were not born with the pandemic but they signal its impact on the lives of the youngest.

Support interventions for adolescents and families

In this past year of “living with the virus”, I have received many requests for support from teens in crisis e Parents frightened.

Girls and boys disoriented, confused, assailed by anxieties, a sense of emptiness and despair, parents worried and full of questions, also overwhelmed by a sense of helplessness and inadequacy. Both with a great need to speak and be heard. Often the malaise made itself felt after the lockdown, during the summer or in September, with the resumption of activities in the presence.  The first listening services activated in schools and educational services were fundamental. They allowed to offer prompt listening and support responses, differentiate disturbances from real crises and orient towards the most appropriate forms of intervention. In some cases, even short paths of emotional support were enough to contain the feeling of discomfort, insert it into a general framework connected to the changes and transformations related to growth.

Where, on the other hand, the malaise has manifested itself in more severe forms, the listening spaces have signaled the need to pay attention and give importance to the discomfort that was manifesting, often evaluating the functioning and health of the entire family system. In many cases, in fact, the pandemic it made visible discomforts whose origins went far beyond the health emergency, rooted in the subjective stories and relational plots of the growing environment. Parents have also benefited from moments in which they can compare themselves with professionals, share concerns and exchange experiences, increasing the possibility of attuning to the efforts and disturbances of their children. To conclude, the pandemic pointed out the need to guarantee spaces for listening and caring for psychological well-being of the population. The services of psychological support they should be low-threshold accessible spaces included among the basic services for primary prevention. They should therefore form an organic and systematic part of the educational services for children andadolescence.

Some attempts in this direction are being made, but it is necessary to continue to ask for organic and integrated answers to overcome the emergency logic and adopt a perspective of strengthening and spreading services to the person.

** Notes on the author: Ilaria Saponaro is a Psychologist and Psychotherapist with a psychodynamic and systemic-relational orientation. He has been working for years for the design and implementation of psychoeducational interventions for children and adolescents and interventions to support parenting. She collaborates with the non-profit CIES for the “MaTeMù” Youth Center and School of Art and coordinates educational activities in schools for the association. It carries out facilitation and training activities on the occasion of training courses, seminars and workshops. He collaborates with the clinical center of the Institute of Integrated Relational Therapy (ITRI) specialized in the treatment of eating disorders. He works as a psychotherapist in private, offering counseling and therapeutic paths for the individual, the couple or the family. Since 2016 he has been an ordinary member of PsyPlus Onlus with whom he collaborates in the area of ​​school psychology services and as a psychotherapist of the Clinical Consultancy Center.