Outdoor education: a response to the educational crisis 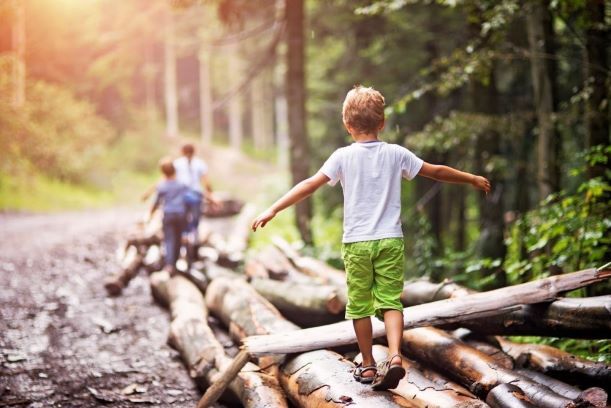 "When the sky is the roof and the teaching tools are the fields and nature ..."

Modern society has imposed a series of socio-cultural changes that have led to a progressive removal of man from his environment and made the necessary contact with nature more difficult.

This represents an objective risk for child development in a wide area of ​​skills, such as it cognitive development, le psychomotor skills and emotional regulation; determining a real educational crisis. What modern childhood is facing is a paradoxical risk: the child does not take a tangible risk determined by direct contact with reality, rather the danger is that he does not take any risk, not stimulating his skills. Therefore, his experiences are aseptic, virtual and lacking, losing contact with real reality, where it is possible to experience the body, movement, sensoriality and the relationship with the other. A 'is making its wayanti-pedagogical education in which the fields of experience are extremely limited, and the authentic relationship with things and people is particularly lacking.

The experience of the game takes on a connotation limited to the virtual game and the use of technological tools, losing that concrete, physical and dynamic game like running on a lawn, strolling on a bicycle or climbing a tree. In the book "The last child in the woods" by Richard Louv, American pedagogist, the expression "Nature deficit disorder" was coined, which does not mean a diagnosis with a scientific qualification, but wants to emphasize how the lack of time spent in the open air is associated with a series of difficulties: short duration of attention in relation to the level of development, hyperactivity and other physical and emotional ailments. In the last few years the percentage of diagnoses has increased dramatically Attention Deficit Hyperactivity Disorder (ADHD), without however considering the development environment, or without asking if the context to which the children belong and grow up fully satisfies their needs. So one should ask whether the disorder has an individual matrix, or rather it is not the artificial environment imposed on children that determines an evolution of this type.

The proposal of theoutdoor education (OE) is proposed precisely as an answer to these criticalities of modern childhood. With "outdoor education", which literally indicates education out of towninternationally means a pedagogical orientation aimed at encourage direct interaction with the natural environment, integrating different facets according to cultures, countries and organizations.

In psychosocial literature, the central nucleus on which numerous authors converge concerns:

The adult, in fact, must support the child in his path of growth and discovery, however avoiding a form of obsessive protection. Clearly, children should not be exposed to dangers, but it is a question of accepting the dimension of risk by allowing the youngest to reach what Vygotsky called "proximal development zone", ie an area of ​​potential development in which the child can evolve beyond skills that already master and fully express their potential as a unique and unrepeatable person.

The "outdoor education" model it does not belong to a specific didactic field, but is intended as a global approach whose prerequisite is the recovery of direct contact with nature. With this in mind, "outdoor education" can become a psycho-pedagogical approach that guides educational contexts, such as la school; but also the family, intended as the first affective nucleus in which the child experiences and through the other significant.

In the field ofoutdoor education, specifically in the school context, nursery schools in the woods have gradually spread kindergarten in the woods, which refer to the age group from 2 to 6 years; as well as the Forest Schoolthat is, schools in the woods that correspond to primary school. In the last decade, the model of educational farms, intended as another way of doing "school", of learning, knowing and sharing; favoring an experiential learning model.

These scholastic models derive from the theoretical contributions of scholars and pedagogists such as: Jean-Jacques Rousseau, Maria Montessori, Rudolf Steiner and Paulo Freire; and inspired the first avant-garde to apply this new way of doing school.

Furthermore, to confirm the goodness of the educational method "en plein air" It intervened scientific research. Scientific studies suggest that studying in the open air actually improves the academic performance of students: after a cycle of lessons outside the classrooms a student was registered increased concentration, the involvement and speed in carrying out the tasks in a group of primary school students.

These elements suggest the need to intervene at ministerial level with an educational plan that can finally integrate school and nature in an innovative school model. Today's school is hyper-cognitive, centered only on learning as information retention; school in nature and the farm are therefore privileged places to change paradigm and promote active, participatory and cooperative learning styles.

* Notes on the author. Giulia Lauri is a psychologist, psychodynamically oriented psychotherapist and PhD in psychology and cognitive science.
He worked at the Laboratory of Sleep Psychophysiology of the Department of Psychology of the La Sapienza University of Rome, collaborating in the realization of sleep studies both in basic research and in the clinic. He carries out psychological-clinical consultancy and psychotherapy in Rome. He deals with the design, management and implementation of the educational programming of the educational farm "Terra del vento". She has participated, as a speaker, in national conferences and is the author of articles and scientific publications. With Psy + Onlus she collaborated within the intervention project to support people affected by the earthquake in central Italy and is included in the area of ​​school psychology services.